Apache Kafka is a common choice for inter-service communication. Kafka facilitates the parallel processing of messages and is a good choice for log aggregation. Kafka claims to be low latency, high throughput. However, is Kafka fast enough for many microservices applications in the cloud?

When I wrote Chronicle Queue Open Source my aim was to develop a messaging framework with microsecond latencies, and banks around the world have adopted it for use in their latency-sensitive trading systems.

In this article, I will describe how Kafka does not scale in terms of throughput as easily as Chronicle Queue for microservices applications. As a teaser, I will show you this chart showing that Chronicle Queue is around 750 times faster even for lower throughput.

Visualising delay as a distance

In order to illustrate the difference, let me start with an analogy. Light travels through optic fibre and copper at about two thirds the speed of light in a vacuum, so to appreciate very short delays, they can be visualised as the distance a signal can travel in the time. This can really matter when you have machines in different data centres.

The 99%ile single microservice end-to-end latency for Chronicle Queue Enterprise at 500 kmsg/s was 3.69 microseconds or about a 10-minute walk in central London.

Using Kafka for the same test, but at a lower throughput of 100 kmsg/s the 99%ile single-stage microservice end-to-end latency was around 2633 microseconds (from 150kmsg/s, the latencies increase dramatically) This is the time it takes a signal to travel 526 km, a distance of about the same as walking from London to Amsterdam. 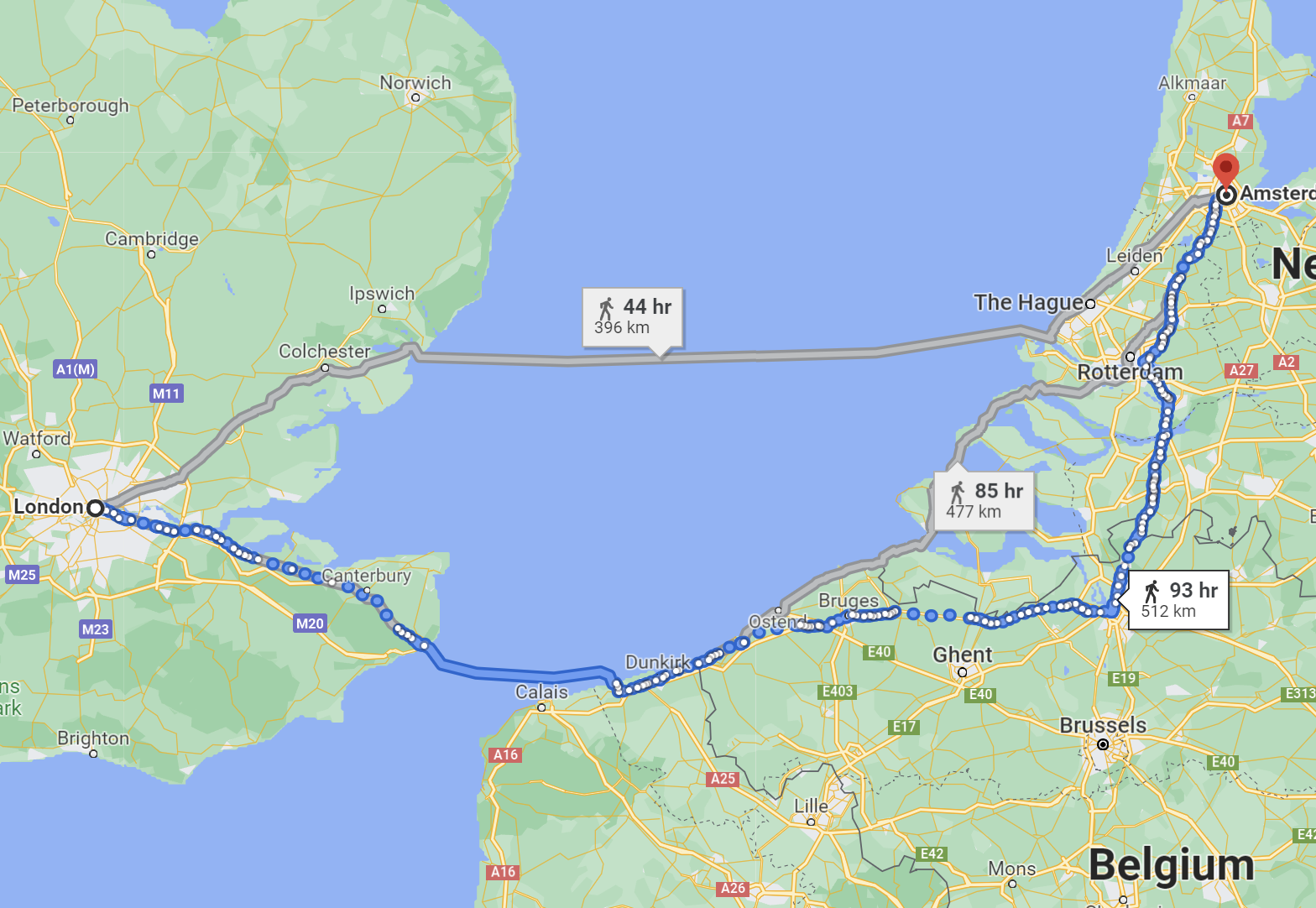 Kafka was originally designed for log aggregation. It has many connectors and for this use case, it does an excellent job. I measured good results which show using Kafka to replace writing to log files in a typical system could improve performance as well as give significantly more manageability. https://docs.confluent.io/cloud/current/client-apps/optimizing/latency.html

In each case, the same test hardness was used. Everything was deployed onto a Ryzen 9 5950X running Ubuntu 21.04. The same MP600 PRO XT 2TB M.2 NVMe drive was used in all tests. The source for the benchmark is available here. https://github.com/OpenHFT/Microservice-Benchmark

The number of partitions and consumers were selected which produced the best latencies 99.99% of the time.

For Chronicle Queue, the performance of 100 kmsg/s or 500 kmsg/s was much the same so I included the 500 kmsg/s results. One publisher, one consumer and one microservice were used.

Benchmarking Kafka at 500kmsg/s messages resulted in messages queuing, with latencies increasing the longer the benchmark ran. I.e. a 2-minute burst resulted in a typical latency of close to 1 minute.

For Kafka to process 250kmsg/s messages, at least four were needed, and a benchmark with eight is reported here as this produced a better result. My understanding is this is a recommended scaling technique for Kafka.

The low latency configuration (linger.ms=0) failed for throughputs over 25 kmsg/s from a single producer.

As can be seen, the typical latency to publish is comparable. However, the outliers are much higher. Depending on the use case, the performance difference might not matter, and the typical publish latency across tests was no more than 2.6 microseconds. 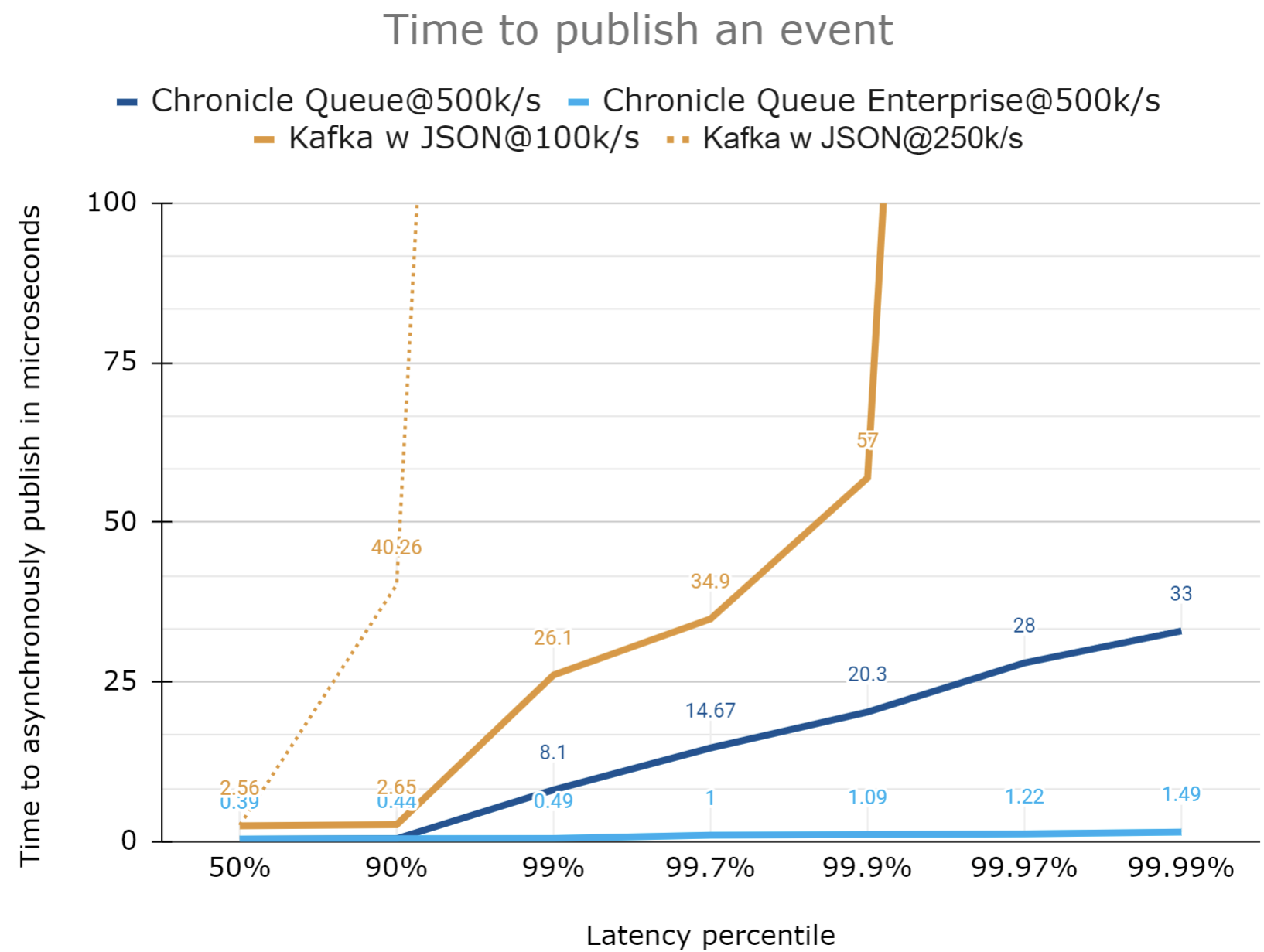 In each case, the same event is published which is 512 bytes long as JSON. Two fields were added to trace when the message was sent. 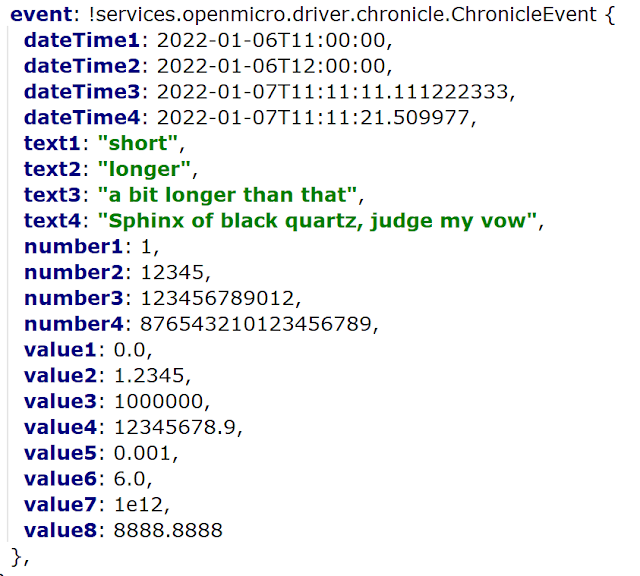 While the time to publish, or the time to send/receive a pre-serialized message can be a good comparison of messaging solutions, this is only a piece of the puzzle. For microservices, you need to know from the time you have a DTO describing the event to process until a downstream consumer reads the resulting DTO from the original microservice.

For a microservices benchmark, we look at the time to send the same event as above, end to end.

NOTE: every message produced creates a second message as a response, so the actual number of messages is doubled compared to a single-hop messaging benchmark.

How does Kafka Perform in Their Published Benchmarks?

Confluent published a benchmark that is one-hop but includes replicated messaging. They report 99 percentile (worst 1 in 100) latencies of 5 milliseconds for an end to end time.
https://www.confluent.io/blog/kafka-fastest-messaging-system/

In our benchmark, we have two hops, serialization and deserialization, all on one host. I expect that for 100k msg/s out and 100k msg/s returned we should get a similar delay as 200 k msg/s over a single hop.

It’s hard to illustrate how much lower latency Chronicle exhibits compared to Kafka, so in the series of charts below, each chart also has a zoomed out version at 10x the scale of the previous one.

Latencies up to 100 microseconds 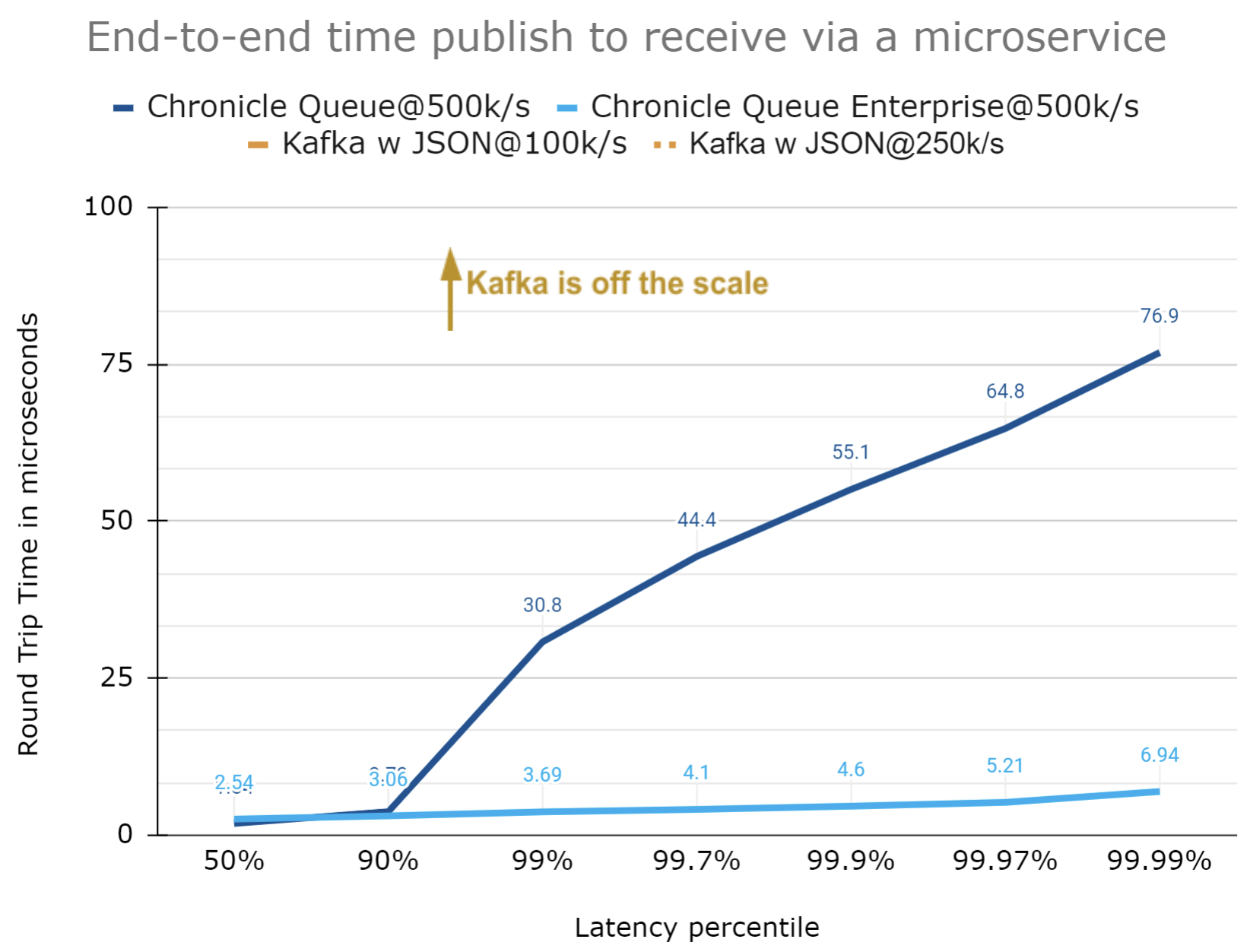 Latencies up to 1000 microseconds

The chart below has a 10x scale, and it can be seen that while Chronicle Queue has higher outliers they are reasonably consistent up to the 99.99 percentile. Kafka is yet to appear. 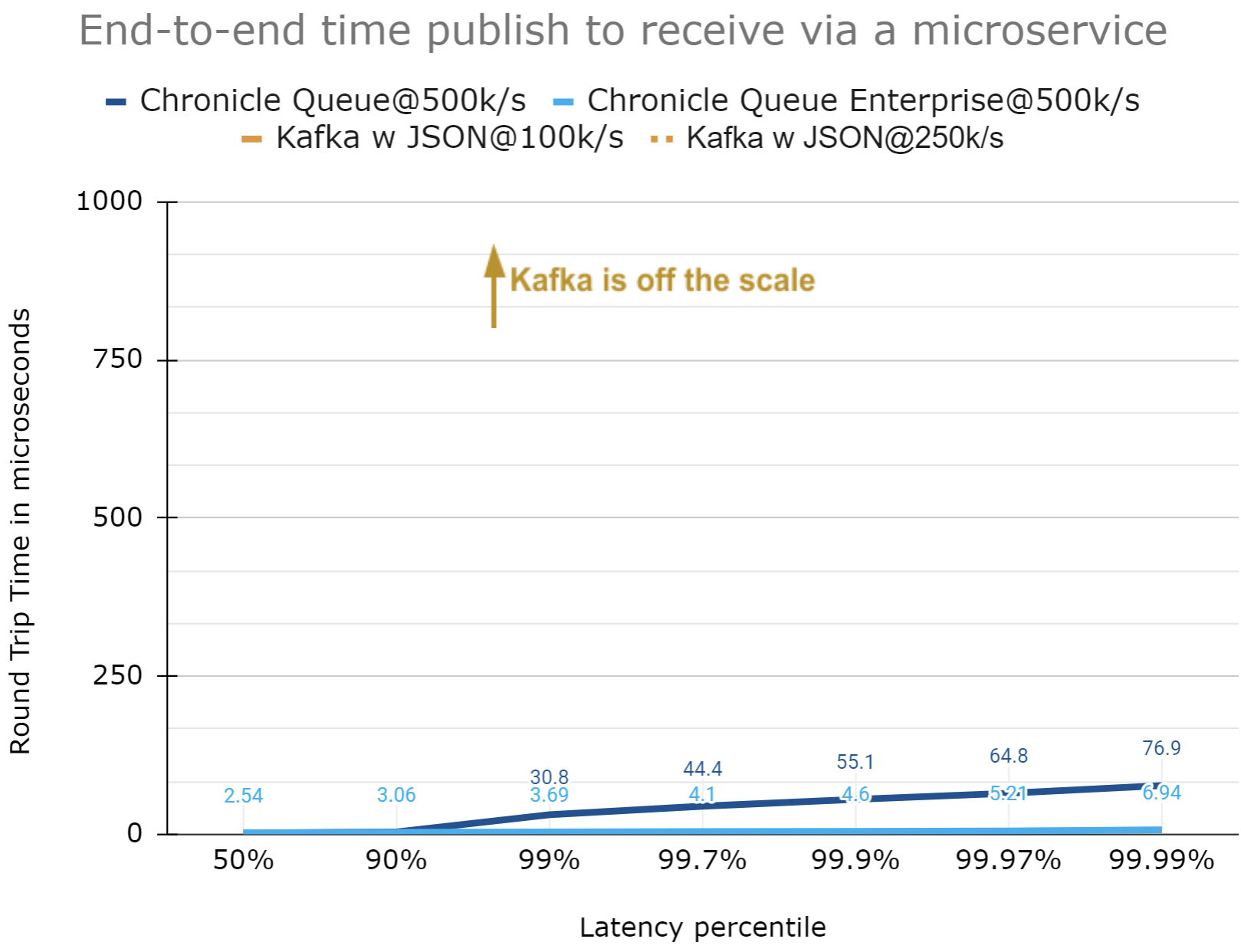 Latencies up to 10,000 microseconds

The chart below has a scale again made 10x larger.  In this scale, not much detail can be seen for the Chronicle benchmarks, but the typical latencies for two of the Kafka configurations now appear. In particular, it can be seen that the 99% latency for 100 kmsg/s (200kmsg/s total) is around 2,630 microseconds, similar to the 5 milliseconds for Confluent's benchmark. 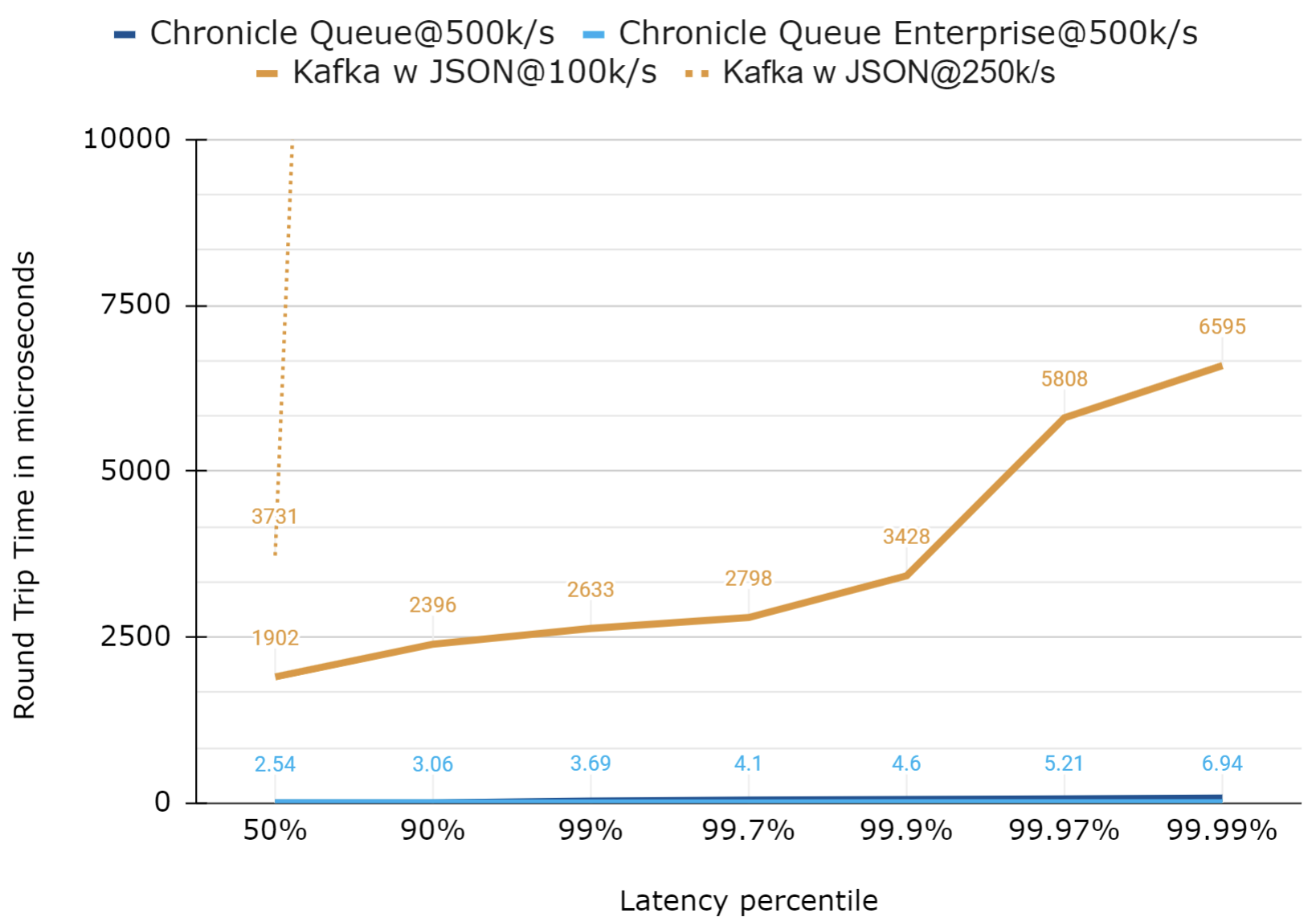 Using a logarithmic scale for the latencies 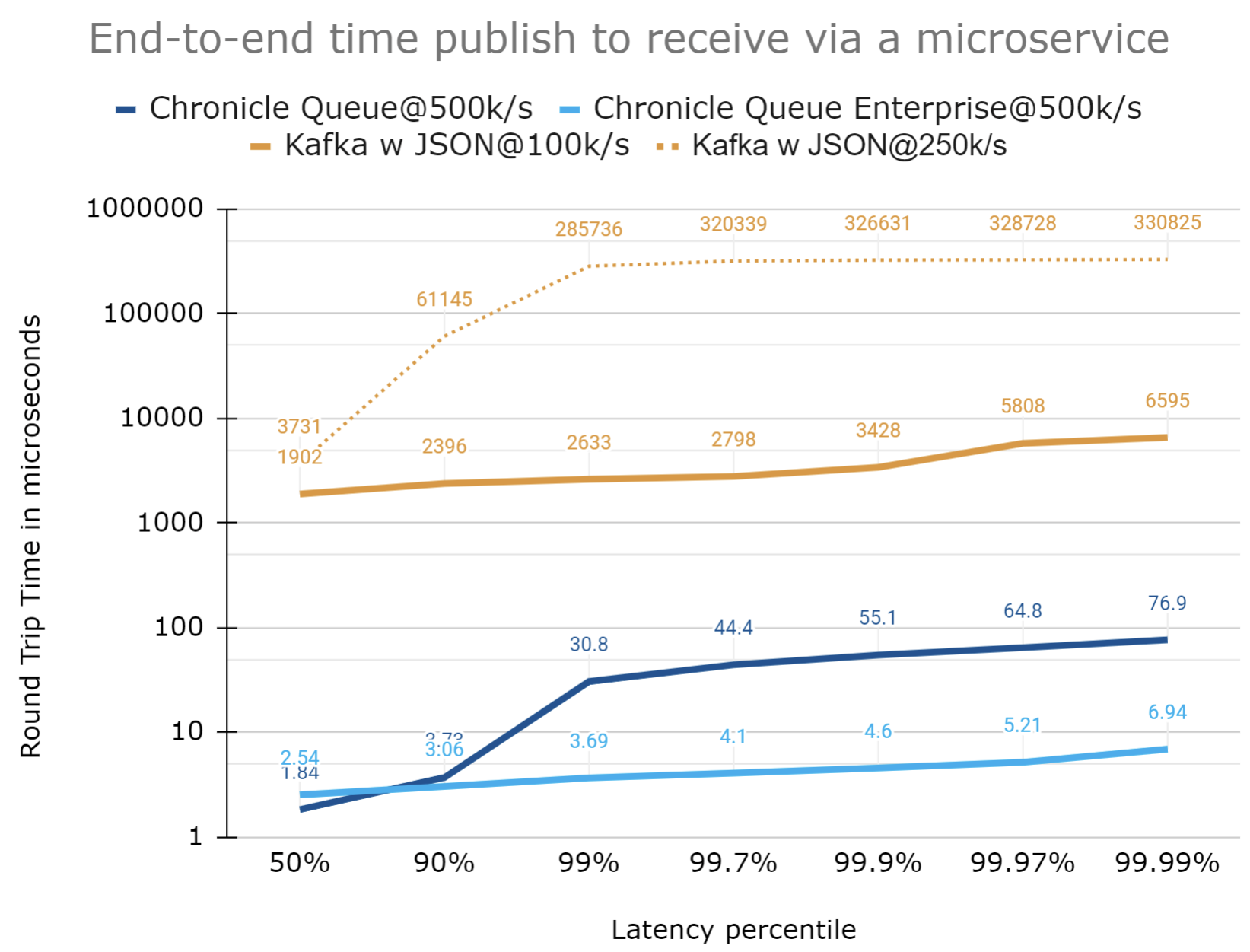 How much higher are the latencies?

Kafka is consistently at least 680x slower for this benchmark, even for one-fifth of the throughput.

For Kafka to achieve its lowest latencies with a 100 kmsg/s throughput, four partitions and eight microservices were used, however Chronicle Queue only needed one in all cases. 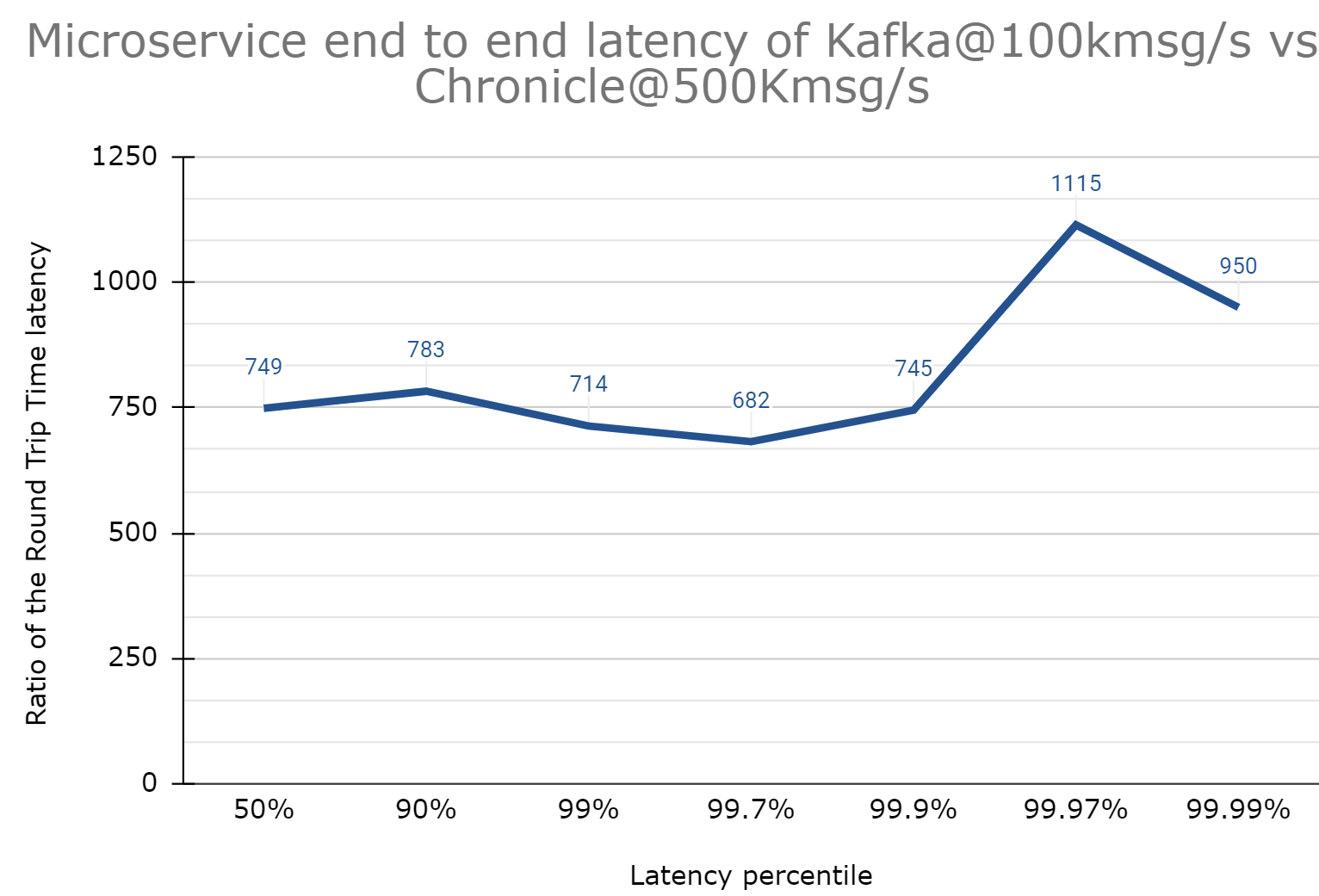 The Chronicle Queue benchmark with 500 k/s messages for 5 minutes (300 million messages total), used a peak heap size of 40 MB with the G1 collector and default GC parameters. The benchmark runs with a 32 MB heap. No GCs occurred after warm-up.

NOTE: Most of the garbage is from the Flight Recorder doing its job and Chronicle Queue doesn’t use the standard Java serialization features. 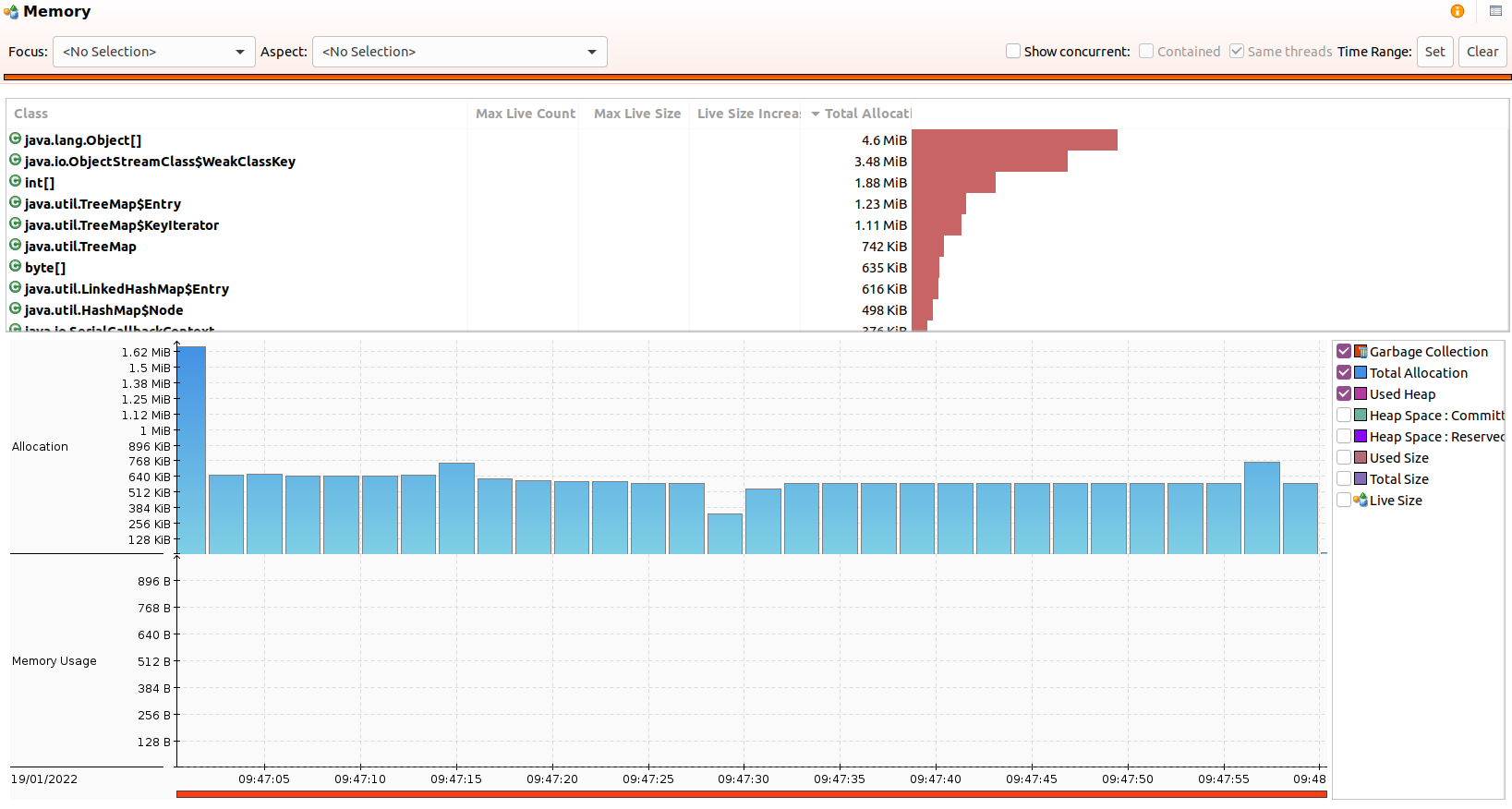 The Kafka benchmark of 250 k/s messages for 10 minutes (300 million messages total), used a peak of 2.87 GB of the heap and triggered 2,410 young pause collections, and 182 concurrent cycle collections after warm-up.

This can be run with a 128 MB heap size but results in over 139k GCs which is sub-optimal. In this recording, the heap size was set to 1 GiB. 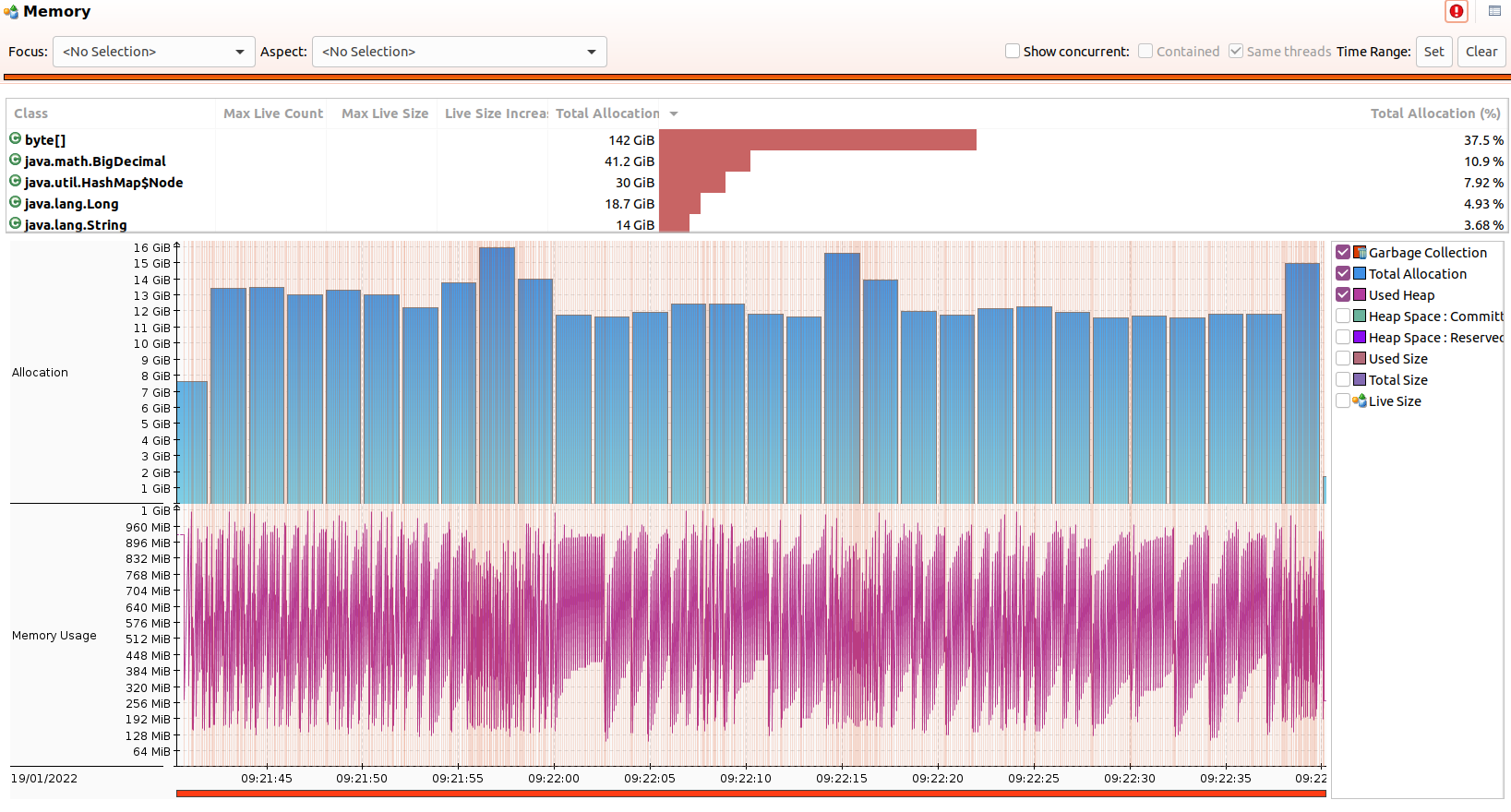 While Kafka is a good choice for log aggregation, it might not be low latency enough for many use cases involving microservices due to its relatively high end-to-end latencies.

Chronicle Queue open-source achieves consistent latencies below 100 microseconds more than 99.99% of the time while Kafka had outliers of 7 ms even at 1/5th of the throughput.

Chronicle Queue Enterprise has additional features to keep latencies more consistent with latencies of below 10 microseconds more than 99.99% of the time.