A history of "Java is Dead"

By Peter Lawrey March 04, 2011
"Java is Dead" has been a popular battle cry for those hoping that a cooler language will emerge as more popular. This could be D, a 4GL, Ruby, Groovy.

This wishful thinking appears to be on the rise. 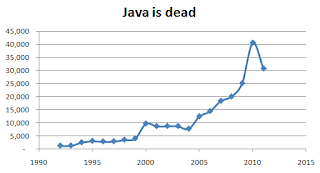 And what are the languages most associated with the "Java is dead" message? I google "java is dead" and language and the top 12 hits were


However, compare this with the number of hits for "Java Programming" and year which suggests there is still a growing interest in Java. 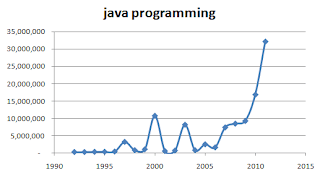 This is supported by the latest Tiobe survey which lists not only Java in the top two most popular Programming Language with C (it varies depending on when the results are taken), but you have to go down to 5th place (C#) to find a newer language. It would appear that Java's main competition are C, C++, Python, and PHP (same age)
Opinion