A benefit of hyper-threading is the ability to support more threads without incurring the overhead of context switches. If your threads spend a high proportion of their time waiting for resources e.g. busy waiting on a data source, accessing main memory or waiting for short periods of time for IO, hyper threading can improve performance at little cost. However, hyper threading can impact performance when the two threads on the same core start competing for resources, such as the FPU, Level 1 cache, or CPU pipeline. For these reasons, hyper-threading is often turned off in high performance systems.

A solution to get the best of both worlds

The Java Thread Affinity version 1.4 library attempts to get the best of both worlds, by allowing you to reserve a logical thread for critical threads, and reserve a whole core for the most performance sensitive threads. Less critical threads will still run with the benefits of hyper threading.

Say you have a system e.g. an Intel i7 with four core and two logical threads per core. 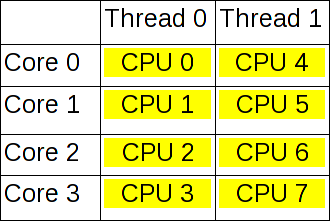 You want to reserve two cores to dedicate to critical threads. On Linux you can do this but using isolcpus= in grup.conf 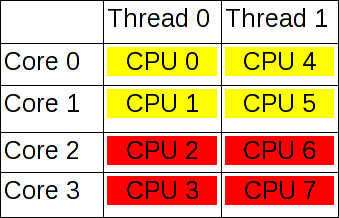 Say you have two critical thread which are busy waiting for resources and can share a core called "reader" and "writer" and you have an "engine" thread you want to dedicate a whole core to (so it doesn't have to compete for resources) You can assign the threads as follows. 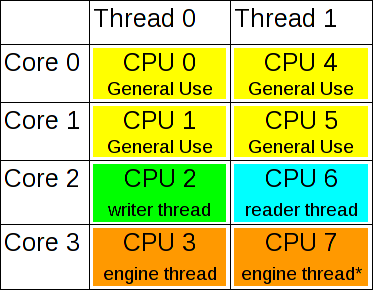 How does this look in code

Sample code to allocate these thread/cores is as follows This code declares that the "main" thread uses a cpu (it gets 7). The "reader" thread should use a different socket or a different core. It get a different core as there is no second socket. The "writer" thread tries to get a thread on the same core, or the same socket, or any thread. The AffinityStrategy is an interface which allows you to create your own thread allocation strategies. The "engine" thread tries to allocate a whole core to the thread. (It finds a core where it can allocate all the threads for that core) When run on an i7 with isolcpus=2,3,6,7 you get the following output