Low GC in Java: Use primitives instead of wrappers

There are two good reason to use primitives instead of wrappers where possible.
Clarity is often more important than performance, and is the best reason to use them. However, this article discussed the performance implications of using wrappers.

I have had a lot of interest in this article How to avoid Garbage Collection, however this was lacking in much practical detail. This is the first article in a series on ways to reduce demands on the GC.

The following micro-benchmark behaves in a way many application do.
This creates objects for each task. While it is common practice to use int for loop counters its is also common practice to use Iterator You can play around with the types and parameters of this micro-benchmark, however you get a memory profile which will be familiar to many developers who have tried to tune their application. Using VisualVM the heap usage looks like this over a five minute period. 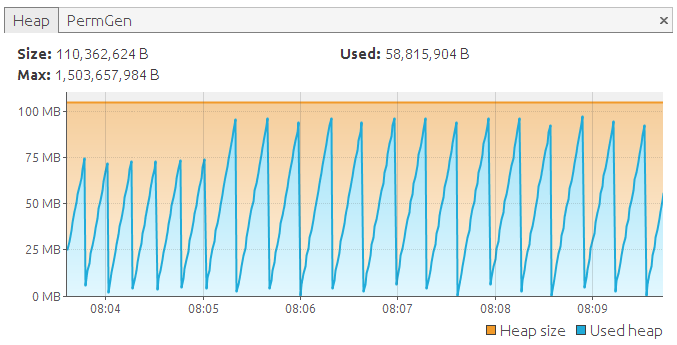 There was 20 minor GCs in about 6 minutes.
The average time of each loop is sub-microsecond which is pretty fast.

In the first test, the JVM hasn't warmed up.

The following benchmark behaves rather differently to most applications. Even though it is doing the same work as the previous benchmark, there is no objects created.
and the heap usage reflects this 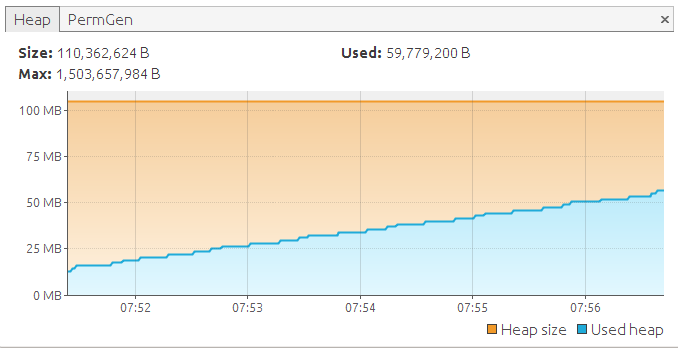 There was no GCs over a period of 5 minutes. The test could have run longer and still not triggered a GC.
And the average time per loop is much lower as well

In the first test, the JVM hasn't warmed up.

Using primitives will perform better. (Unless there is excessive boxing and unboxing)

Even in applications where performance is not critical, it will improve clarity, both of the code and when you do attempt to profile your application, it will reduce the level of "noise" making it clearer as to what the problem is.

Even in the test where few objects were created, you can see some object allocation. This is mostly due to VisualVM's polling. To reduce this I changed the polling interval from 3 seconds to 20 seconds.

The Eden size was increased to make the graphs clearer with -XX:NewSize=100m This value is not recommend (except perhaps for micro-benchmarks) but its is a parameter you may need to tune for your application.